Do you have a project that requires fuel supply for back-up power?

Read on about how to follow industry best practices for storing fuel in buildings... What does that mean for your project? It means that continuous power is a reality, whether it be for a critical industries such as healthcare, telecommunications, or data centres, even defence, government or aviation, we have the solution. The SuperVault tank has proven time and time again that it offers undisputed benefits over a fire rated room and going underground, namely:

Simplicity of specifying, installing and complying
See Case Studies
Talk To Us

Book A Presentation With Our Specialist What are the 3 ways to store fuel in a building?

Read our article below where we dive deeper into the 3 ways you can (legally) store fuel in a building. 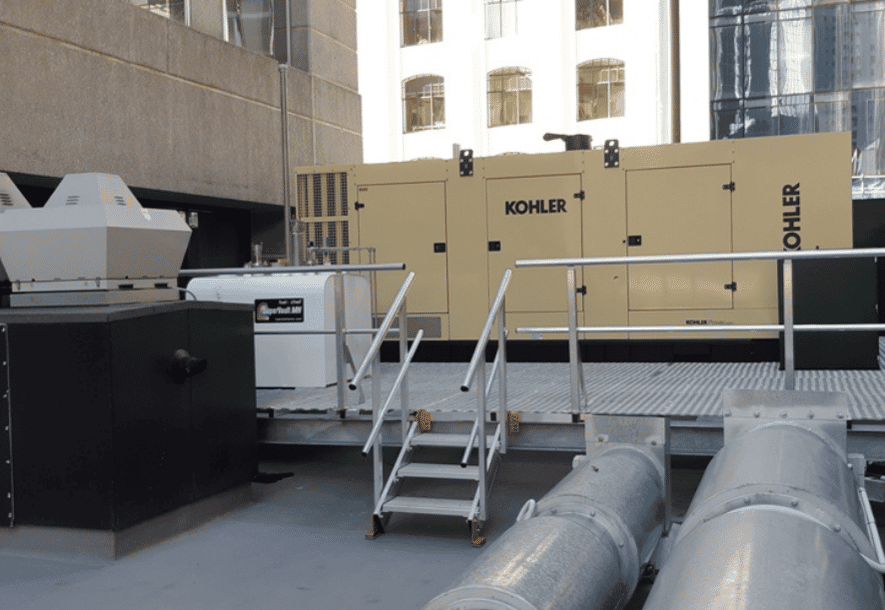 A SuperVault Rectangular Series 500L tank was installed on the roof of Citibank's tower in Auckland. A custom 1,400L SuperVault Rectangular Series tank was installed to provide critical power for the hospital. 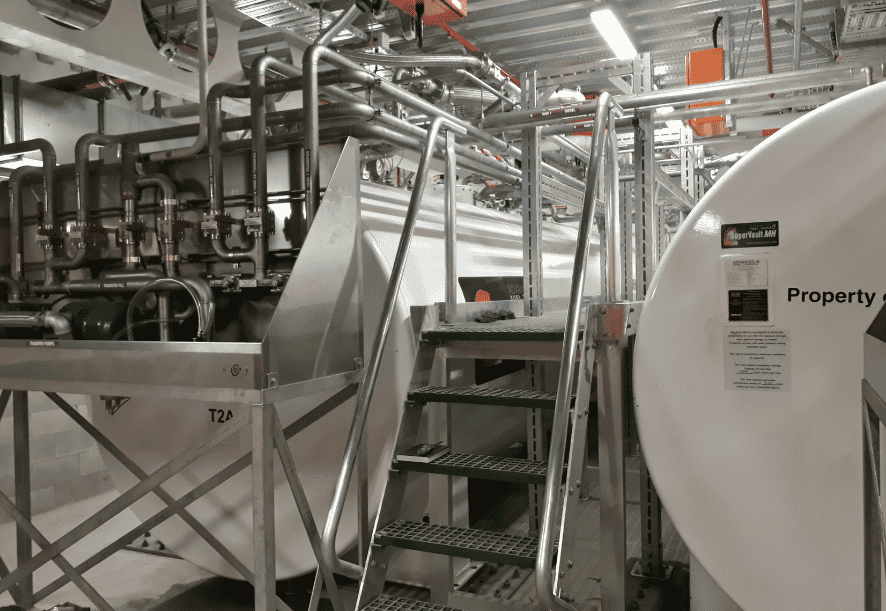 2 x SuperVault Cylindrical tanks holding 22,000L each with an IL4 rating were used to run the boilers for the hospital. 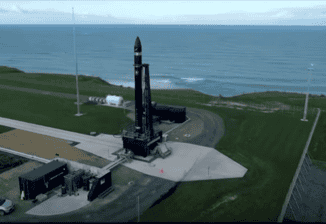 Fuelchief have provided fuel tanks for Rocket Lab in Mahia and their launch station. 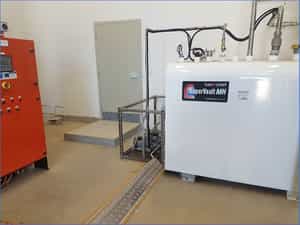 Fuelchief supplied a SuperVault Rectangular 2,000L tank to the Australian Corrections Department – Cessnock Prison in NSW. The tank is located inside the services room next to the generator. 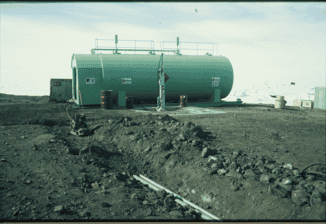 2001 was the commissioning year for the SuperVault to enter the harsh environment of Antarctica. Several tanks were installed to fuel generators/equipment at the base.

The compliance certificate for the SuperVault tank was issued by the Southwest Research institute where the multi hazard testing was exercised.

The Southwest Research Institute (SwRI) is a not-for-profit organisation based in San Antonio Texas who provide independent services to government and industry clients.

They push the boundaries of science and technology; from deep sea to deep space, SwRI multidisciplinary teams tackle the toughest challenges, such as that of multi-hazard testing of our environmentally compliant SuperVault.

The SuperVault tank meets the standard for protected tanks certification, this includes SwRI 95-03, SwRI 93-01, SwRI 97-04. An explanation of these is available in the download. 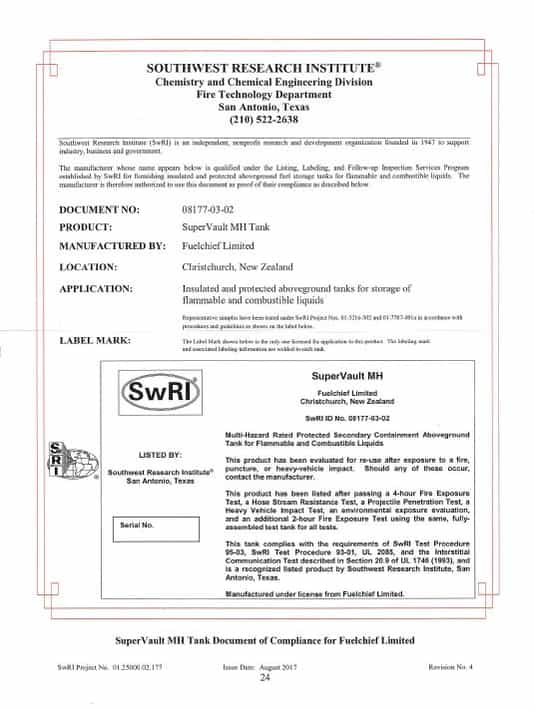 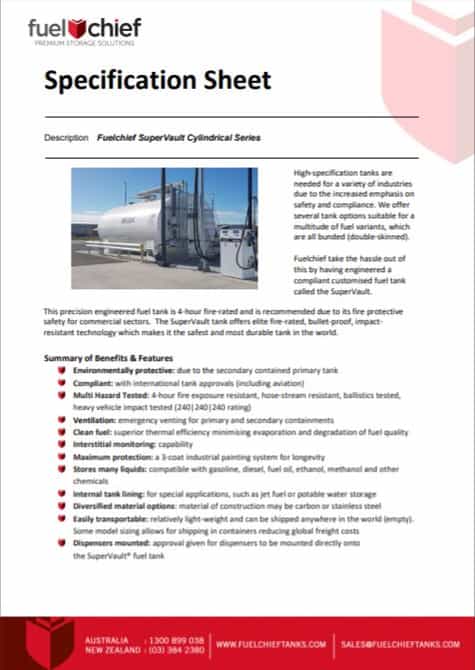 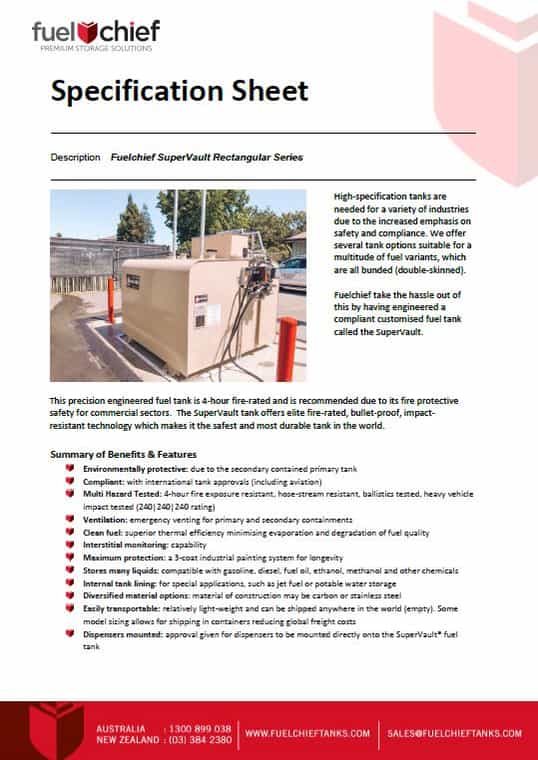 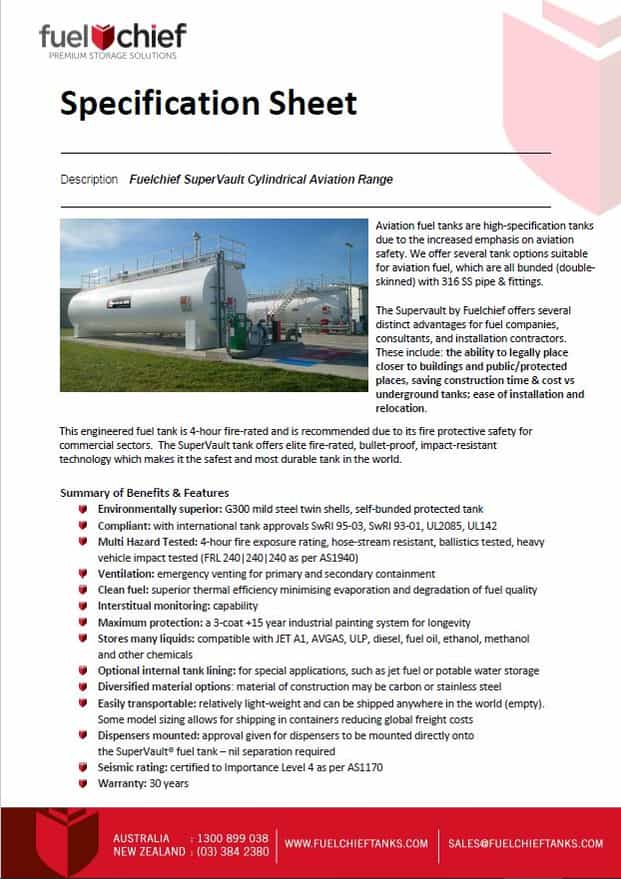 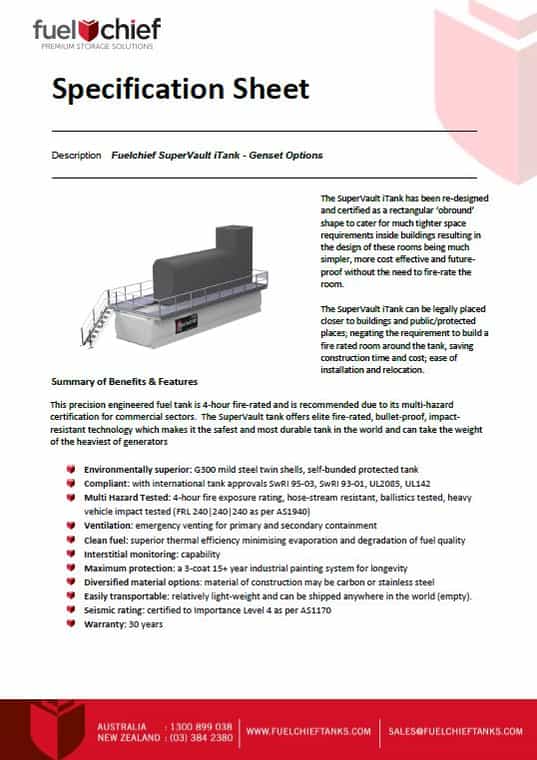 What is Multi Hazard Testing? And Why Is It Important For Above Ground Fuel Tanks?

The fuel tank storage industry is constantly challenged with increasingly stringent fire and impact exposure requirements for above ground storage tanks. At Fuelchief (and our former company Advanced Fuel Tanks), we have collaborated for decades with the Southwest Research Institute (SwRI) in San Antonio Texas who are a key body in performance testing above ground fuel tanks. As part of this process our 4-hour fire rated SuperVault was put under the spotlight to be scrutinized and see if it lived up to its expectations. These tests are carried out by certified and experienced members of SwRI who document the results of each test. Ongoing; the SuperVault is audited to ensure these compliances are regularly upheld.

Our SuperVault above ground fuel tank compliance is conducted by the Southwest Research Institute (SwRI). SwRI  is responsible for having developed a performance evaluation procedure for above ground tanks to address the concerns of fire marshals and regulatory authorities across the US and beyond. SwRI procedure 93-01 exposes tanks to high-intensity fires, hose stream tests, ballistics and simulated impact tests. The procedure determines if the above ground fuel storage tank meets the requirements established by the following specifications listed below:

The pivotal addition to this, the icing on the cake if you will, is the SwRI 95-03 procedure, which evaluates the performance of a multi hazard tank in withstanding multiple exposures to the simulated hazards described in procedure SwRI 93-01; while SwRI 97-04 is used to evaluate fire-resistant tanks according to the latest standards.

Image: The testing facility in San Antonio Texas where the SuperVault fuel tank was exposed to its multi hazard test. 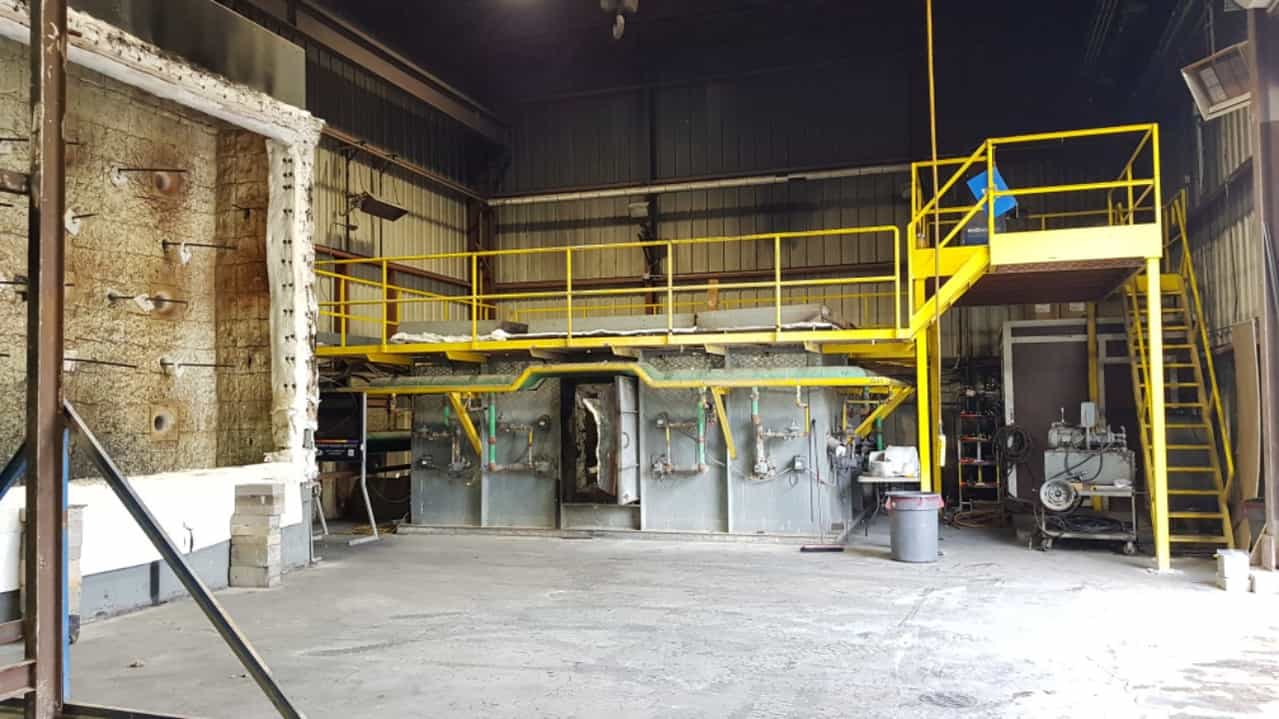 The test is conducted in testing facility at SwRI. These are discussed briefly below. The result of this test means the SuperVault not only meets health and safety standards, but also fire rated and environmental.

The first step in the multi hazard testing for the SuperVault tank was:

Find Out More About Testing 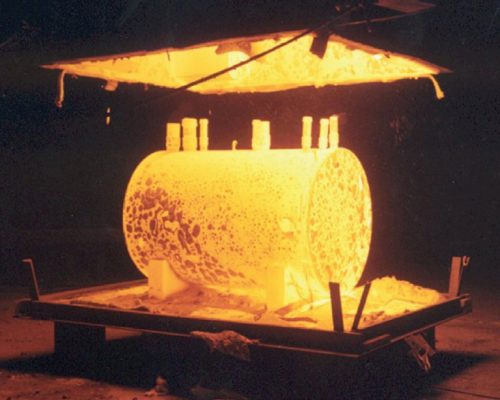 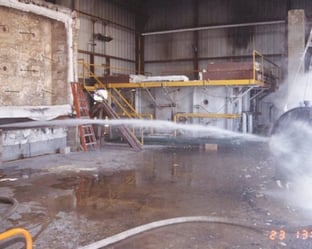 After the High Intensity Fire Exposure test the tank moves onto stage two which is the Post-Fire Hose Stream Resistance Test. Here the controlled tank was subjected to the cooling, erosive and impact forces of the hose stream. 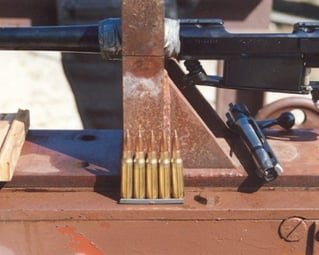 Next up is a projectile test which involves 5 x rounds of 150 grain M-2 ball ammunition (823 meters/sec) fired at the test tank. 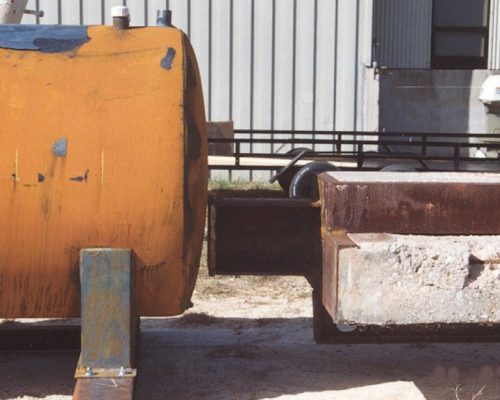 The final test is the Heavy Vehicle Impact Test, whereby the tank (according to SwRI 93-01 and SwRI 95-03) is to withstand the impact of a 5,443kg battering ram, simulating a vehicle impact at 10mph.

....The Final Test....The Tank Is Subjected To An Additional

In this additional test, the tank is then given a fire rating level of 240/240/240 which is in accordance with AS1940. The additional exposure of the tank ensures that it can be re-used after an event (such as earthquake, fire,  impact and the like).

The additional exposure of the tank ensure that it can be re-certified and re-used after an event, unlike any other tank in the market that will need to be removed from operation. 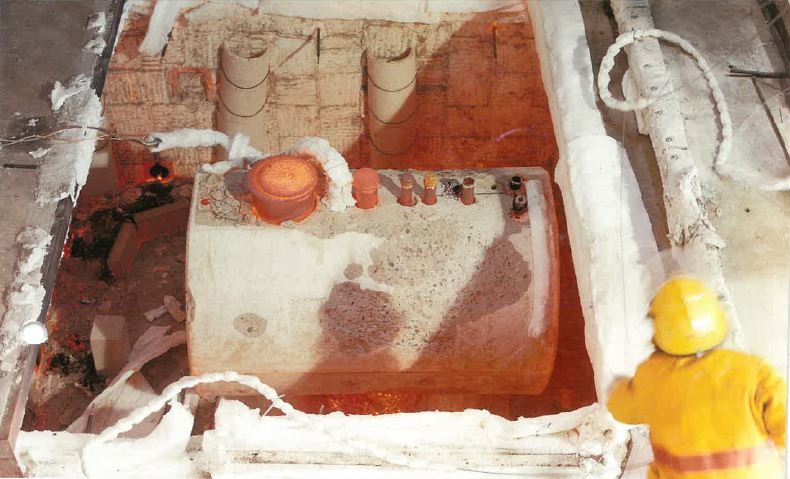 See what others have got to say... 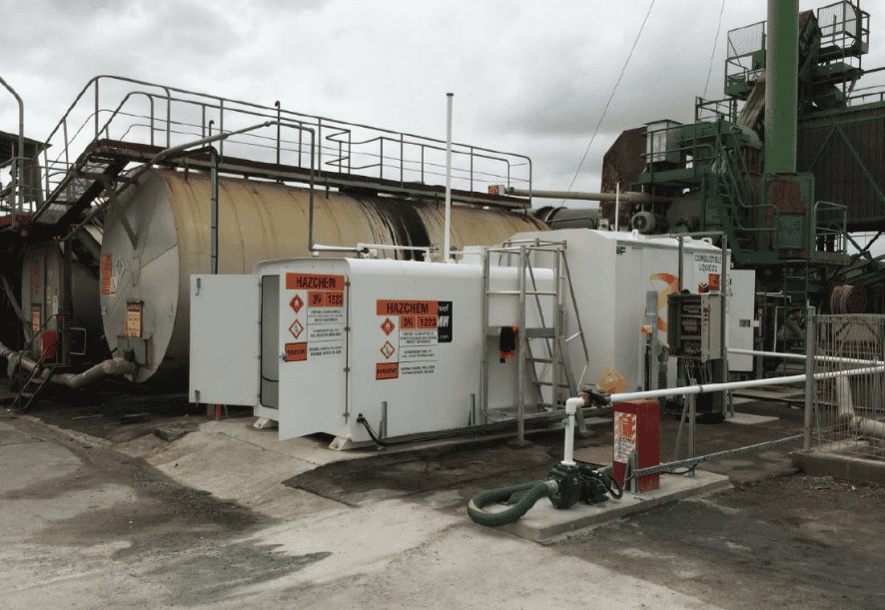 As part of the Downers bitumen plant upgrade in Port Whangarei, a 5,000L SuperVault was implemented to replace a non-compliant fuel tank. 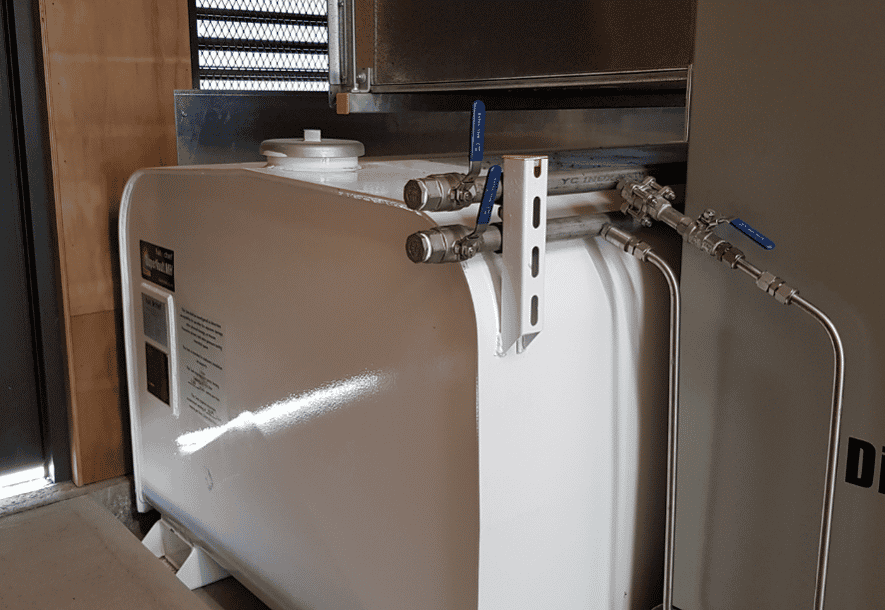 Due to the compact requirements 2 x SuperVault tanks were constructed to support onsite generators for Nelson City Council. 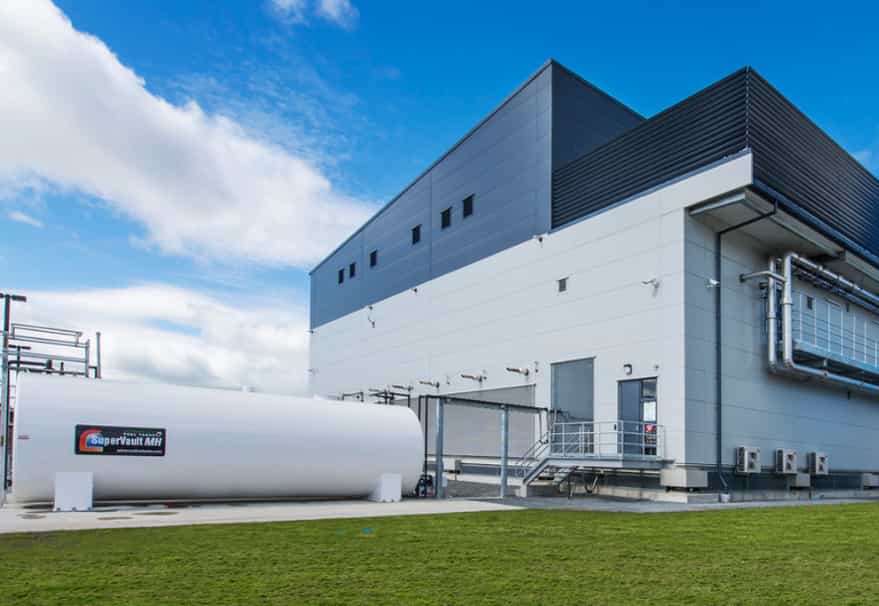 If I locate a SuperVault tank inside the basement of a building, do I still need to ensure the room around it is fire rated?
No. As per AS1940 which governs the storage of fuel inside a building, ‘Tanks having an FRL of 240/240/240 [4 hour Fire Resistance Level] shall be regarded as complying with the requirements for tanks in chambers (see Clauses 5.13.1 and 5.13.2).’ [AS1940 5.9.4 c]. Note that some other so-called ‘protected’ tanks do not comply as they do not carry the 4 hour fire rating.
What happens to the requirement for pumps if the room is not fire rated?
The fuel transfer pumps and/or other pumps located in the room do not need to be treated specially as they are outside the fire rated fuel tank and away from the fuel. In fact, the Supervault specifically allows them to be placed directly next to, or on the tank with zero separation distance, a great space saving benefit. See AS1940 Clause 5.9.4 (d) (iv) ‘[Separation distance] To a dispenser………..nil. NOTE: A dispenser may be mounted on a tank, provided it is suitable for use in the hazardous area around a tank.’
If the tank is fire rated, but the pipework connected to it is not, will that be compliant?
Yes. The SuperVault was tested and certified in a 1000C degree furnace with the same standard socket connections that it has now. The internal temperature of the tank did not rise above the flashpoint for flammable liquids. So standard single wall pipework into the tank is safe and compliant. Double wall and fire-rated pipe is also available on the market, so can be utilised if the situation requires.
How can I quantify the savings of installing a SuperVault tank versus a standard tank in a fire rated room, or underground?

The type and method of building varies from project to project, however in a like for like comparison we estimate savings of up to 25% can be achieve by installing a SuperVault tank vs a fire rated room or underground tank. These savings are increased if you consider the time and cost saving to the builder, the reduced ongoing maintenance and servicing costs, and the potential to save square meters for the client to divert into revenue such as a car park. Sound financial reasons to opt for the SuperVault in your project. Check out our whitepaper for review of this.

How easy is it to specify the right tank inside a building?

Fuelchief aim to make it as easy as possible. We work with all stakeholders including developers, tenants, consultants, architects, contractors, and installers to outline the best size and solution. We have sizing tools, CAD files and specification templates to save time when you are specifying Supervault into your project or premise.

Can the Supervault be placed outdoors and does it offer any advantages?

Yes the SuperVault can be and offers distinct advantages in an outside installation. It is protected with a +15 year 3 coat paint system, and carries a 30 year manufacturer’s warranty. The advantages are twofold: firstly, it reduces the hazardous zone required around the fuel storage by half (allowing closer placement to buildings and public places), and secondly, it carries a multi-hazard certification including an impact rating, allowing it to be installed cost effectively without the requirement for expensive armco barriers.

What is a Grade A office building and how does the SuperVault tank help?

A Grade A office building is one that ‘overwhelmingly meets the stated criteria’ of the publication A Guide To Office Building Quality released by The Property Council of Australia (PCA). Under this guide, a PCA Grade A office building requires 12 hours of back-up power supply. Our SuperVault tanks offer critical benefits when it comes to the design and ongoing maintenance in an innovative building project.

Can the SuperVault be moved from a location?

In comparison to any other fuel tank, relocating a Supervault is a no-brainer. An underground tank would need de-gassing, filled with an inert substance and certifying as ‘out of service’, while the SuperVault can be easily be decommissioned and set up elsewhere due to its certification and multi-hazard rating. What makes it even more attractive is that a SuperVault does not require an expensive demolition of the fire-rated room that would normally surround a standard aboveground tank.

What is AS1170 and does it matter for tanks in Australia?

AS1170 is the Standard relating to seismic and wind loadings on buildings and structures. It is in 5 parts and outlines the design requirements and loadings on Structures due to actions of wind, snow & ice, earthquakes in Australia, and earthquakes in New Zealand. In Australia, the wind loadings apply to regions susceptible to cyclones etc. The hazard zones for earthquakes will also apply and come into force in some areas. In relation to fuel tanks, Engineers will consider the way they are fixed to their foundations under certain loads, and this is especially important when they are part of a bigger system such as a burner or critical back-up generator. The Standard applies an ‘Importance Level’ rating from IL1 to IL5 depending on the hazard factor of the location, and the type of structure, e.g. hospitals.

We'd love to answer any queries you have.